Watts was born and raised in the East End of London, England.

Watts started his career in 1950, working as a focus puller, a camera assistant. In 1967, while working for The Baron, he began working as a chief cameraman, or cinematographer.

He became involved with the British Society of Cinematographers (BSC) in 1970, and served as the President of the BSC from 1984 to 1986. 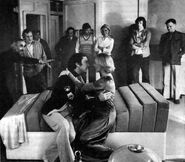 On set of The Taybor. L-R: Bob Brooks (with his arm out), Frank Watts, John Downes (the bearded man wearing a striped tank top) Suzanne Heimer, and Gerry Toomey.

On set of A Matter of Life And Death. L-R: Frank Watts (seated), Martin Landau (in costume, hiding Neil Binney), Charles Crichton (crouching), Keith Wilson (at the top of the steps in front of the door), Barry Morse (in costume) Johnny Byrne, John May, and Eddie Francis (all three of them seated at the top of the stairs), Richard Johnson (seated in foreground), Tony Allyn (in costume), and Alan Meacham (sitting in the corner). 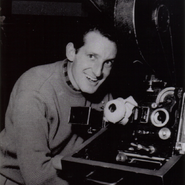