Seed of Destruction is a Stub Article. You can help Moonbase Alpha Wiki by expanding it.

An ice-cold replica of Commander Koenig takes control of the moon -and orders its destruction.[1]

A jewel-like asteroid comes into range of the Moon, but defies the computers analysis. Koenig and Carter take an Eagle to investigate. Sensors detect a localized area of atmosphere. When they land the Eagle's computer signals a malfunction in the Eagle's systems. Alan stays to repair it, while Koenig takes a look around. He finds a cave that looks like a hall of mirrors. While searching the cave, a "reflection" of Koenig comes to life and starts following him.

It stuns him and, after taking a sample of the rock in the cave, uses Koenig's commlock to contact Alan and tell him he wants to leave in five minutes. It trades jackets with Koenig so that it will not appear reversed. It returns to the Eagle and, despite Maya's request to delay liftoff long enough to clarify some strange sensor readings, it rushes back to Alpha and declares that the base is being held in an energy screen that will render Alpha's instruments useless. It initiates construction of an energy beam to be aimed at the asteroid and reflected back, to break the energy screen's hold on Alpha. When Maya questions it's data, it confines her to her quarters.

Everyone is shocked at "Koenig's" behavior, and tries to figure out what is causing it. Alan suspects that there is some other danger from the asteroid, that he isn't ready to reveal yet. Tony visits Maya to discuss what is wrong with Koenig, and what, if anything, they can do about it. The possibility that Koenig could be declared medically unfit for command is discussed, but they decide that only Helena would be able to give them guidance. When asked, Helena is not confident that Koenig couldn't be doing what he says for exactly the reasons he says.

Meanwhile, back on the asteroid, the real Koenig learns the nature of the threat from the Voice of Kalthon, which explains that a black sun began to drain the enregy from his people's world. But they managed to survive by reducing the essence of their world into a seed, a microcosm in suspended animation, waiting to be reborn. They need Alpha's energy stores to return the "Heart of Kalthon" to life. A process which the mirror Koenig is setting in motion back on Alpha.

The mirror Koenig oversees the construction of the energy reflector. Helena visits him to try to ascertain what is wrong with him. She asks him to have a medical examination. He tells her that he has no time. She says she could order him to. He asks her if she thinks he would do anything to risk the lives of the Alphans. She takes his hand, and it is cold. She tries to cover her reaction but barely manages not to run from the room. She tells Tony and Maya what happened and they decide they need to examine a sample of the rock that "Koenig" brought back from the asteroid.

Maya transforms into one of the technicians from the observation area to gain access to the rock. She lasers off a small piece and returns to her quarters to examine it. She learns that it was once living matter, that has had the energy drained from it to leave it in a dormant state, like a seed, waiting to be reborn. Back on the asteroid Koenig shoots out a mirror and gets trapped within.

Tony and Maya attempt to convince Alan that something is wrong with "Koenig". Alan is convinced it is nothing more than stress due to the danger discovered on the asteroid. They ask for his help in getting an Eagle but he refuses, not believing. Tony and Maya procure an Eagle, and head for the asteroid. The mirror Koenig is alerted, and orders it shot down. Alan refuses because he knows who took it.

Mirror Koenig prepares to shoot the Eagle down himself, until Helena convinces him that it will put his energy beam project behind schedule. He tells them that the asteroid did affect him in some way. Helena declares that he is not John Koenig. He threatens to confine her to her quarters. She backs down, and he increases the power flow to his beam again.

Tony and Maya find John trapped within the mirror on the asteroid. They free him, and tell him what has been going on back on Alpha. He tells them about the "Heart of Kalthon". He has them search for it so they can destroy it with sound, while he returns to stop his mirror image. As soon as Koenig lifts off, Tony and Maya get trapped within another mirror. Koenig returns in time to countermand his reflection's order to transfer a critical amount of power to his energy beam.

Mirror Koenig tries to convince the Alphans that he is the real one because the lettering on John's Jacket is backward. John counters, telling them that he switched jackets but forgot one major detail... the part in his hair! Alan shoots the mirror Koenig. It has no effect. The real John activates the sound capable of destroying the crystal, freeing Maya and Tony, while the reflection of Koenig shatters before their eyes leaving only a pile of crystalline material behind.[2]

The "Observation" set is the first in Year Two to include windows to the surface (according to publicity the Moonbase had moved underground). There are also windows in the Recreation Center in The Lambda Factor and Seance Spectre. 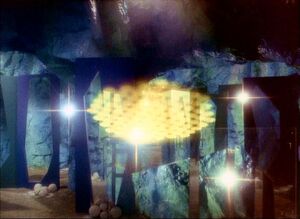 The opticals from the firestorm in Catacombs of the Moon are reused.

The DVDs contain an interview from July 1976 with Brian Johnson, showing the storyboards and the setting up of one shot. The shot (scene 73, showing the Eagle from below illuminated green) is not in the final episode.[1]

The crystal asteroid is perhaps related to a white dwarf, where a small star has collapsed into an inert core of carbon and oxygen, about the size of the Earth but extremely dense. They are also extremely hot, although over time they cool into a black dwarf star. The carbon core of a white dwarf may be an enormous diamond. One variable white dwarf star, BPM 37093 is estimated to be 90% crystalised (of a mass 1.1 times that of the sun), making it the largest known diamond.

The asteroid has Earth gravity and a "localised atmosphere", suggesting it is very dense. However, it seems unlikely the total power of Moonbase Alpha could regenerate an entire planet.

The term "black sun" is used again. It is featured in the episode Black Sun and also mentioned in Dragon's Domain.[1] 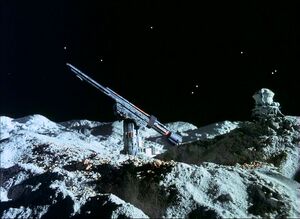 The fixed laser cannons are seen. They are also in The Metamorph, The Beta Cloud, The Bringers of Wonder - Part 1 and The Dorcons.

The multi-function hatch is shown; here it fires the laser canon.

There is a close-up shot of a computer panel clearly marked "Satellites".

The forward view screen is seen. It is also seen in The AB Chrysalis, Space Warp, Bringers Of Wonder - Part 2, The Seance Spectre and Devil's Planet. 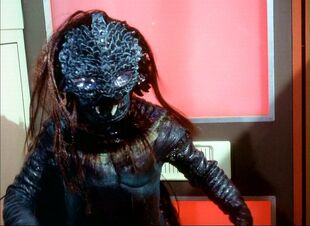 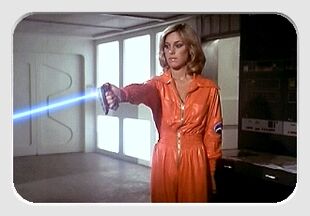 Props: Life Support Section is a minimally changed Weapons Section (among the red panels beyond are the "Life Support Systems Control" panels also seen in the Power Room in The Beta Cloud and Bringers Of Wonder - Part 1) The first Moonbase window to be seen in Year 2. Note the gravity tower immediately outside. The dish is presumably the transmitter dish- although the model version does not have the number "3".[1] 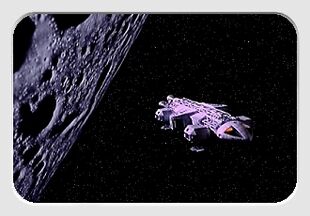 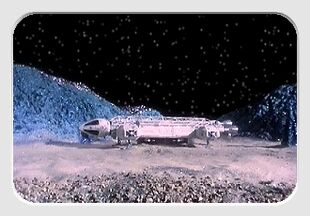 Koenig's Eagle has a booster pod when first seen, then a standard pod subsequently.

Koenig is in the Weapons Section when he calls Weapons.[1] 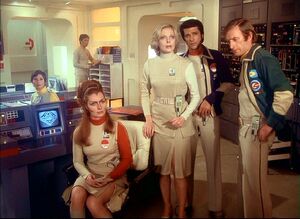 Unusually, Helena isn't wearing her long boots in one shot.

The original script had an epilogue in which Koenig's crystal sample is projected into space.