The Bringers of Wonder - Part 1

The Bringers of Wonder - Part 1 is a Stub Article. You can help Moonbase Alpha Wiki by expanding it.

The Bringers of Wonder - Part 1

Everyone on Moonbase is electrified by the arrival of a spaceship from Earth. Everyone, that is, except Commander Koenig. Where the others see long-lost friends and relatives, he sees hideous aliens, bent on taking over the Moonbase...[1]

John Koenig takes an Eagle to check reports of a surge in the neutron count near the nuclear waste domes. He begins flying erratically, and when Tony tries to contact him, he is irrational and unresponsive. Unable to remotely control his Eagle, they watch helplessly as he flies dangerously close to the nuclear waste domes, Koenig's Eagle strikes an antenna on one of them, and loses control. He crashes, but manages to put on his helmet before losing consciousness.

A rescue Eagle is dispatched, with a few nuclear physicists sent along to check for any damage that the crash may have caused. Koenig is pulled from the Eagle, and there are no signs of complications from the impact with the domes. Koenig is rushed back to Medical Centre, where Helena has him hooked to an Ellendorf Quadrographic Brain Complex. Although an experimental technology, Helena feels this may be Koenig's only chance for a full recovery. Back in Command Centre, Sandra reports a sensor contact, that turns out to be a ship moving towards Alpha at faster-than-light speeds. When in visual range, the ship appears to be a Super-Swift originating from Earth. It moves in to land. Tony has Alpha's lasers aimed at the ship, but Sandra receives a transmission from the vessel and puts it on the big screen. Tony recognizes the Captain of the vessel as his brother Guido!

Clive Kander records the reunion as the crew, which consists of close friends and family of several of the Alphans, disembarks and is reunited with their loved ones. On the Super-Swift with Tony's brother were; Helena's old tutor Dr. Shaw, Sandra's fiancé Peter Rockwell, Ben's fiancée Louisa, and an old flame of Koenig's named Diana Morris, among others. Helena cringes at the thought of dealing with her, but Dr. Shaw leaves her to deal with Diana, who has been looking for John since she arrived. Two of the visitors leave Command Centre, seemingly take control of a medical technician they see in a hallway, who returns Medical Centre and attempts to kill Koenig by disrupting the brain complex that John is hooked up to.

Dr. Vincent sees, on one of the remote medical monitors, that something is wrong with Koenig, but Louisa seems to have an hypnotic control over him, causing him to turn off the monitor. When Alan pulls Louisa away, her control is broken, and Ben runs to Medical Center and prevents Sandstrom from killing Koenig. In Command Centre, Tony catches Maya trying to sneak off, not wanting to disturb the big reunion. He tries to allay her fears, but Diana Morris interrupts. She insults Maya, then proceeds to flirt with Tony. Maya transforms into a creature behind Diana, but Tony catches her, and she reverts before Diana is any the wiser. Ben and Helena discuss the possibility of a connection between John's erratic behavior and Sandstrom's attempt on Koenig's life, but no evidence could be found to connect the two. Koenig wakes, and Helena tells him about the rescue ship. He listens with incredulity to her description of the Super-Swift's crew, until he realizes she is serious. He hugs her, and they proceed to Command Centre to join the reunion. When they arrive, John freezes upon entering, seeing not the friends from Earth he was told about, but grotesque aliens. He orders their ship destroyed, but Tony countermands his order. He tries to shoot one of the creatures, but Helena stuns him before he can shoot Tony's brother.

Convinced that John is suffering from delusions, Helena puts him in restraints. Tony and Helena try to calm him, down, but he remains very agitated, and needs to be sedated. Maya contacts Tony telling him that Kander has locked himself in the Records Lab, put the emergency oxygen full on, jammed the door, and wrecking the place. Maya tries to get him out, but oxygen is ignited in the struggle, and Kander dies. Guido pushes Tony to select three people to return to Earth in a pilot ship, before the Earth starts to move out of range. Back in Command Centre, Tony draws lots for the three lucky people. But the names he is reading are not the ones on the cards. He is clearly under the control of Guido and Dr. Shaw. Tony checks on Koenig in Medical Centre. John tries to convince them that he is rational, and that odds are against the rescue team all being friends and relatives, and the three picked to return to Earth being on the Nuclear Monitoring Team. Sandra alerts Tony that the pilot ship is ready to lift off. John becomes agitated, and is sedated. The launch is watched in Command Center, and all over the base.

Alan, Bartlett, and Erlich find that they are approaching Earth with little appreciable sense of time passing. They contact Alpha to let them know that Earth is in visual range, and can barely contain their excitement as they approach. Dr. Shaw visits the unconscious Sandstrom, and plants a directive into his mind. Sandstrom wakes and breaks free of his restraints. Tony and Maya are on their way to show Koenig images from the pilot ship approaching Earth, to help convince him that things really are as they have been trying to tell him. Tony is attacked by Sandstrom, and Maya transforms into a Kendo fighter, knocking out Sandstrom. Dr. Shaw enters Medical Center, where Koenig is still in restraints. John sees the repulsive creature approaching, and strains against the straps that bind him, unable to free himself. He watches helplessly as it moves in close...[2]

Edited with part 2 in the compilation movie Destination Moonbase Alpha

The Superswift was built by Martin Bower in 3 weeks.

The small pilot ship was also built by Martin Bower

The domes were redressed from the towers in The AB Chrysalis

Martin Bower also built a second 22" Eagle. It is seen in publicity photos over the waste domes, but it is not in the episode.

The aliens were made from latex painted in grease, with plastic tubing through which "blood" was pumped. 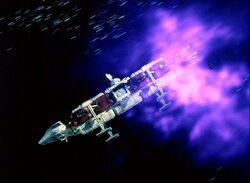 You would not be able to see a faster than light ship-it would be infinitely redshifted and thus invisible. If you could see it, your first view would be it landing; then you would see the image of it travelling backwards into space as the light caught up with the spacecraft. It covers 8 million miles in 6 seconds, which is 7.2 times the speed of light.
Editor's note:The Super-Swift most likely dropped to sublight speed before entering visual range.

In Koenig's crashed Eagle, fires are burning. Once the external doors are open for the firefighters, the vacuum would extinguish the flames.

Alpha Technology: The fixed laser cannons are seen. They are also in The Metamorph, Seed of Destruction, The Beta Cloud and The Dorcons.

The Ellendorf Quadrographic Brain Complex was used to test the artificial heart in Catacombs of the Moon and also appears in The Lambda Factor.

The silver firesuits are seen, both in the crashed Eagle and in the Records Lab fire. Note they do not have oxygen backpacks.

The Records Unit, consisting of technician Clive Kander, films significant events on a small hand-held camera. This is the only episode where Eagle crashes or alien contact is recorded.

Cast: Stuart Damon first appears as Parks in Matter of Life and Death. David Jackson also appeared as Alien Strong in The Rules of Luton

Footage: Shot of Koenig and Helena kissing is shown again in a flashback in Devil's Planet

If they are telepathic, why do they not know Maya is a metamorph?
Editor's note:The telepathic ability could be limited either by Maya's Psychon physiology, the alien's disguises or both.

When Koenig crashes he does not have his front pack on. When the rescuers arrive, his back pack is on, although he was unconscious since the crash.

They have forgotten Journey to Where, in which they found the Earth date was 2120 AD.
Editor's note:The communication signals could have traveled through time as well as space.

Maya transforms into the full armour (bogu) of a Kendoka, and attacks Sanderson with a shinai (a staff consisting of bamboo slats bound together). Her role is performed by sensei Okimitsu Fujii, one of the founding fathers of kendo in the UK. In Testament of Arkadia Koenig and Luke Ferro practice kendo (performed by stuntmen Eddie Stacey and Gerry Crampton). In several martial arts, Maya's short stick would equally effective. Known technically as a yawara-bo or kubotan (the latter form is often sold as a keychain), it is easily improvised with pens, flashlights or any short stick around 5 - 6 inches long. Techniques include striking, attacking pressure points, and leverage for compliance locks.

David Jackson on his role: "They gave me the script, and I didn't even have to memorise it! 'Your character is actually a 7 foot tent with blood vessels and eyes on the outside of it, and it can grow up to 9 feet.' They had a fellow about my size inside, dressed in a swim suit, sweating like anything, manipulating this thing, more like a teepee than a pyramid. It kept going up and down and sweating blood and I was just offstage in a T shirt and trousers. It was fun!"